Joshua Robbins. Praise Nothing (The University of Arkansas Press, 2013). 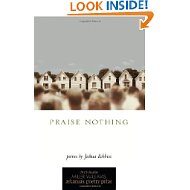 Despair, and its accomplice Acedia (the spiritual version of ennui), have been part of literature since at least Chaucer’s disturbing portrait of the Pardoner. Recent poetry knows these complex feelings best from Berryman’s mantic and morose Henry, who makes a game of his despair and invites the reader to play along. In Berryman’s dream songs, we are surprised to see that rather than nullifying the poetic impulse, despair urges the poet toward enumeration, that the poetic analog of Acedia is not silence but rather catalog. There seems to be something about despair that drives one to ever closer examination of what is, as if the fear of the void pushes a poet to cling frantically to the variety, the astounding copiousness of the material world. This same tendency to turn despair into catalog, into ontological enumeration is apparent in Joshua Robbins’ debut volume, Praise Nothing.


Praise Nothing announces its despair in its title and begins with a poem in the form of a list. The poet names “the streetlights’ high murmur,” “the rattle of shopping carts,” “the skirr of asphalt // worn to gravel” and on in a minutely observed and detailed catalog of a decaying suburbia. The poem’s insistence that “nothing / need be forgiven,” its essential nihilism expressed in lines like “whatever / your thoughts of heaven / by now they’d be long // unutterable,” is in creative tension with the abundance of the imagery. This tension animates the poems throughout this book. I could pick examples from anywhere and begin cataloging Robbins’ catalogs, but let the poem “Collateral” suffice as an example, as it is very explicit on the matter. In the silence after listening to his neighbor beat a stray dog with a two-by-four, the poem’s speaker tells us


as if this world had never been


more pure, that the rasped October


breeze through the birch trees on our street


meant nothing, saw nothing, could say


nothing. There was only silence,


then a clang of wood on concrete


and, somewhere, the dead leaves stirring.


The creative tension between the urge toward nothingness and the urge toward enumeration is evident in the brilliant line break between “as if this world had never been” and “more pure,” a taking away and a giving. Again as the poem ends, he creates silence, then fills it with the two-by-four dropping, the leaves stirring. The book stays energized by never settling into total negation nor simple abundance: neither second-rate Baudelaire nor second-rate Whitman, neither Nine-Inch Nails nor Mary Oliver.


Thus, when I point to the thread of nihilism in Robbins’ book, the tendency toward negation, it should be understood that this nihilism is tentative and contested, always at odds with the intense desire to recover faith. Such is always the way with despair, which is, after all, not a form so much of atheism (one could not imagine a despairing Richard Dawkins) as a form of frustrated desire. Think of the Pardoner’s preoccupation with the language of salvation or Berryman’s Henry always teetering on the verge of hymn (or indeed of Berryman’s own last works, such as “Eleven Addresses to the Lord”). This desire for belief is expressed in poems such as “When I Say Hymn,” in which the speaker expresses clearly the will to believe in lines such as “the day after the fire // we sang over the sanctuary’s / ashy smolder.” The image itself carries the tension of faith and despair, of hymn and ash. We see this tension also in “Heaven As Nothing but Distance,” in which the poet declares, “I could not even begin to count / all the things I wished to believe in,” again linking a faith deprived with a sense of the copiousness of the world.


In Praise Nothing Robbins shares many characteristics with poets whom we may call, loosely, the best of the “neo-confessional,” poets such as Matthew Zapruder or Matthew Dickman, born in the 70’s or 80’s, writing about the vacuity of American life, drawing frequently on popular culture and personal reminiscence: edgy and direct yet also, at times, experimental. (Another good example, and well worth a read, is Jeff Simpson, author of Vertical Hold). Robbins’ religious sensibilities, however, add something unique to his work, a reaching after eternity even as the poet seems to feel that his reach exceeds his grasp.
Posted by Ben at 12:25 PM No comments: